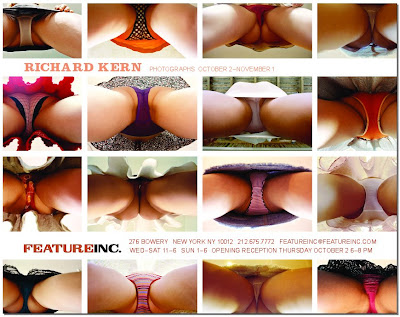 Posted by a at 4:10 PM No comments: Links to this post

In this solo exhibition, Dikeou uses Marilyn Monroe’s living request to be buried in Pucci as the lens through which to reconsider various developments in art and design since the 1960s, particularly as they relate to the social, urban and popular cultural contexts. The installation will be comprised of various objects of art, artifacts and design including 36 abstract paintings created by the artist based on a Pucci dress. The number 36 represents the age of Monroe on her death. Five color photographs documenting the American flag hanging at half-mast in New York’s Union Square to commemorate the death of the great baseball hero Joe DiMaggio will be mounted on aluminum and hung sequentially showing the change of light on this mournful day in American popular culture (five was DiMaggio’s Yankee baseball jersey number). DiMaggio adored Monroe not only in her lifetime when he took her as his bride but in her death and year’s after their divorce remembering his love for her with six red roses that he would send weekly to her burial site. During the run of the exhibition, The Parisian, the Beverly Hills florist who took care of DiMaggio’s weekly request, will deliver a funerary urn with six red roses to The Design Center. The artist has commissioned a replica of the DiMaggio-Monroe platinum eternity band and it will be displayed for viewers to touch or try on affecting the spirit of this iconic American romance.

In this installation the artist focuses formally on creating works where Pop Art, abstract painting, Minimalism, Performance and Conceptual art variously converge questioning the mutual exclusivity of these art historical categories. All of the varied components will be melded together to suggest a loose biographical and historical tableau of this romantic and turbulent era in American culture.

The Goldie Paley House, where The Design Center is located, is a 1950’s-era modernist home built on the model of the California Case Study houses. Floor-to-ceiling glass windows provide sweeping views of a garden and swimming pool that was designed in the shape of a baby grand piano. The pool will be covered in a tarp that the artist has designed inspired by the undulating swirls of the Pucci dress.

Devon Dikeou has exhibited widely throughout the United States and Europe including: Hohenthal und Bergen - Statements: Basel Art Fair 29, Basel, Switzerland; MAMCO, Geneva in collaboration with Outcasts Incorporated; Postmasters Gallery, New York; and more recently at artMovingProjects, Williamsburg, Brooklyn. Dikeou is the publisher/editor of Zingmagazine, a curatorial crossing, an award-winning publication that recently celebrated its 12th anniversary.
Posted by a at 5:00 AM No comments: Links to this post 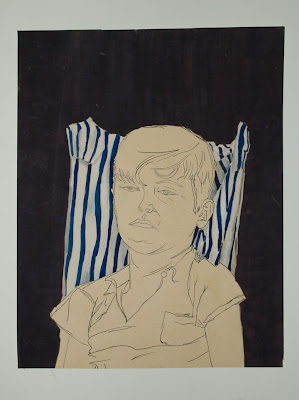 Andy Warhol "Self-Portrait"
http://www.nysun.com/arts/possible-warhol-self-portrait/70054/
Posted by a at 9:27 AM No comments: Links to this post

David Sandlin at Jack the Pelican 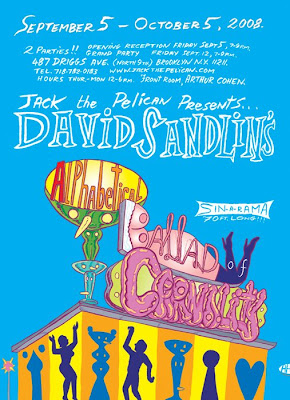 Posted by a at 6:01 AM No comments: Links to this post

The video game as a medium and a style of life has reached its middle age along with the first generation of people who grew up playing them. The non-linear, interactive, processor based narratives, which at first mimicked Hollywood and struggled to convey their simple content with 8-bit processors, gradually became the largest entertainment industry in the history of electronic media. RESET/PLAY is an exhibition attempting a critical exploration of contemporary art inspired by video games. Questioning the history, control mechanisms, political and art-historical implications of electronic games, RESET/PLAY assembles a formidable group of international artists who made a significant impact on this growing post-game artistic sub-genre. Artists include Cory Arcangel, Michael Bell-Smith, Mike Beradino, Brody Condon, Alex Galloway, JODI, Guthrie Lonergan, Kristin Lucas, Joe McKay, Michael Smith, Eddo Stern and Keita Takahashi.

RESET/PLAY is organized for Arthouse by guest curators Marcin Ramocki and Paul Slocum, both of whom are practicing media artists who also run independent spaces in Brooklyn and Dallas, respectively, that focus on media art. The exhibition will be accompanied by an 8-bit music and film festival co-organized by the Austin Museum of Digital Art.

Posted by a at 5:56 AM No comments: Links to this post