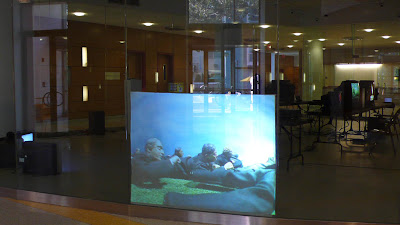 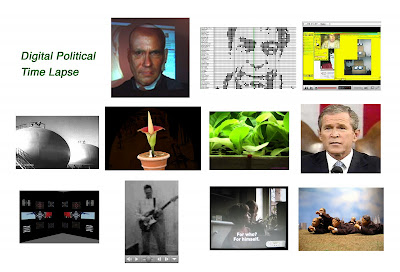 In many different approaches these artists address
our current political and physical environment.

Aunrico Gatson
“Media Center” 2003 is a single channel video shown on three
monitors. It is a meditation on the atrocities of the War in Iraq through
the use of images lifted off the internet. The soundtrack is a Tibetan
Buddhist chant that expresses both chaos and order.
http://www.feldmangallery.com/pages/artistsrffa/artgat01.html

Jillian Mcdonald
Horror Cycle: The Bloom of the Triffid
video • 2006
animation • 2006
The Bloom of the Triffid is a one and a half minute animation loop. In August 2006 one of the world’s most rare and remarkable plants, a corpse flower, bloomed in Brooklyn’s Botanical Garden. Visitors came in droves, attracted to the flower's monstrousness. Notably, in Victorian times, ladies were not permitted to view such a bloom due to it’s phallic visual reference. A webcam was trained on the bloom which released a gruesome stench. Throughout the week-long bloom, I tracked the webcam, fanatically downloading images. The title and soundtrack reference "The Day of the Triffids", a novel written by John Wyndham in 1951 and made into a cult film in 1962. Triffids are fictional plants that are capable of various animal behaviors including attacking and killing humans.
http://www.jillianmcdonald.net/media.html

Adam Simon
Video Portrait DVD 2002
Moyra Davey talks about “afgani boys playing with gameboys” – “we have to shop to save ourselves” – “we lay waste our powers in getting and spending” -
http://www.adamsimonart.com/

Paul Slocum with Chad Hopper
"Hats"
"A big chunk of Slocum's screen space is taken up with a banal jpeg of
baseball hats on an armchair; the rest is a confused multiplicity of
windows opening and closing as well as overlapping and interrupting a guy
confessing on YouTube his unfaithfulness to his girlfriend." Tom Moody
http://www.qotile.net/blog/wp/

Momoyo Torimitsu
(Part of) Horizon DVD 2004
This video is part of an installation in which a hundred toy businessmen crawl around in a model world with oil fields.
courtesy of :The Swiss Institute and Deitch Projects
Posted by a at 11:36 AM