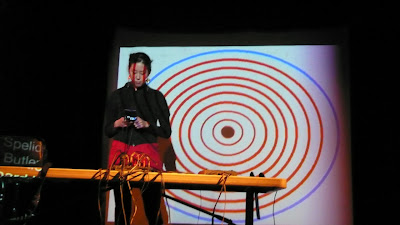 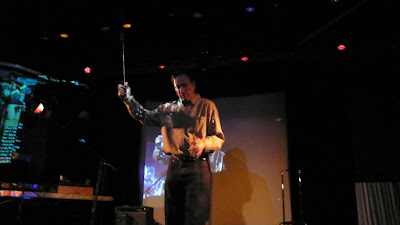 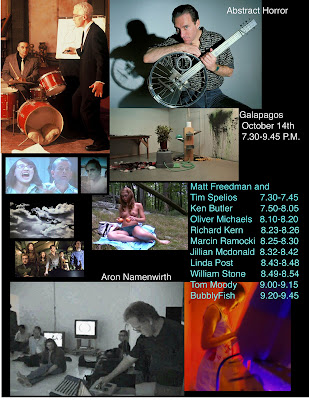 7.30-7.45 Matt Freedman and Tim Spelios (performance)
In this collaboration these multi-talented artists riff off each other, Matt drawing cartoons as Tim drums. Satire meets absurdity in this off-beat combination.

7.50-8.05 Ken Butler (performance)
Ken Butler’s Voices of Anxious Objects The artist-musician performs mesmerizing world textures and driving melodic gypsy grooves with passion and purpose on an amazing arsenal of amplified hybrid string instruments made from household objects and tools. Duchampian Dada meets Hybrid Hindu Hendrix as function and form collide in an environment ofhyperactive hardware. Perhaps he will drag out some of the more “dangerous” instruments for this show. Guns, swords, axes, and knives may sing for their supper.

8.20-8.8.23 Richard Kern (“Lulu in the woods”1 minute. A short video of a beautiful young woman (lulu) moving around in nature in her underwear. Innocence mixes with anticipation of some action.

8.25-8.30 Marcin Ramocki “Serenity” dvd “Serenity* is a short and funny video depicting a group of people discussing the artistic merits of the
sci-fi feature "Serenity”

8.34-8.40 Linda Post ( Mortal Storm) dvd Mortal Storm appropriates the opening footage of a Hollywood film of
the same title from 1940. A god-like voice booms over storm clouds,
lamenting human the weakness to resort to violence. The scene is
repeated, locking us in a loop of the dilemma.

8.41-8.46 William Stone “Savage Ferox” dvd
In 2005 Stone traveled 150 miles up a jungle river in Guyana South America with Mark Dion and Bob Braine. Shark the guide tells a story of the only movie that he had ever seen on a big screen as a few bottles of rum were consumed around the jungle campfire. It was an Italian movie called Savage Ferox (sometimes called Let them Die Slowly) that was banned in Italy because it was rumored that real human corpses were used.

8.50-9.05 Tom Moody (performance) For this performance Moody will play a selection of his tunes accompanied by looping animated GIFs from his website.

Galapagos http://www.galapagosartspace.com/newmedia.html
Posted by a at 11:03 AM