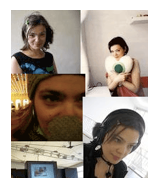 October 29, 2007
Blogger Skins
It used to be a bit creepy to admit you googled a new friend or business acquaintance, but these ad hoc background checks are now customary. Marcin Ramocki's latest project 'Blogger Skins,' at artMoving Projects in Brooklyn, references the layer of character these simplistic queries impose upon us. Often out of date, decontextualized, and in some cases shockingly spot-on, our google search results, for good or bad, have become inextricable from our identities. To visualize this process Ramocki used Google's image search on art bloggers Tom Moody (tommoody.us), Paddy Johnson (artfagcity.com), Regine Debatty (we-make-money-not-art.com), James Wagner (jameswagner.com), and Joy Garnett (newsgrist.typepad.com), and tiled the first one hundred images that appeared into a mosaic 'portrait' of each critic. The snapshots point to the absurdity of such cursory investigations, and flip the dynamic between the artist/critic and researcher/researchee relationship. Regine Debatty becomes an art world supermodel, Paddy Johnson appears to have a relationship with Lou Reed, and Tom Moody is an abstract art-creating cricket player. In his own words Moody notes, 'I like what Ramocki says but vaguely wish I didn’t have to be the proof.' - Caitlin Jones
http://www.artmovingprojects.com
Posted by a at 9:31 AM