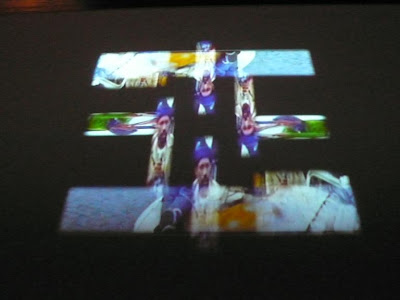 Still from video projected on pedestal on floor Spirit, Myth, Ritual, and Liberation 2008 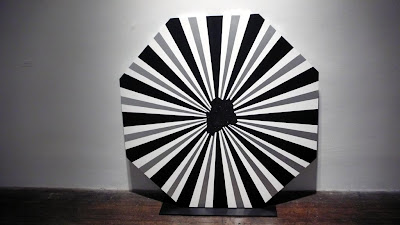 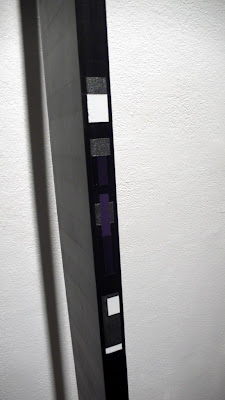 In this exhibition Gatson takes multiple forms of art: video, sculpture, and painting and brings them together in a social and racial critic. Darkness or rather Blackness pervades the gallery offset by white, gray-silver and sparkles taking a secondary place to create graphic op arty hybrids. Two of the wall pieces come supplied with their own hand painted light sources. Seamlessly moving between medium this artist uses his message to carry the form. In this work is felt a triumph of spirit perhaps now with our new kinda of Black President will
come the hope and confidence so desperately lacking in our sad times. I think that good art reveals itself on the surface as well underneath. The attention to the skin that rapes is made more powerful in it's refection.

For his fifth exhibition at the Feldman Gallery, Rico Gatson will exhibit a large-scale video installation, sculpture, paintings, and works on paper that continue his exploration of racial issues and shared cultural histories. Gatson uses conceptual and other artistic strategies to distance emotionally-disturbing events and injustices which can never be fully understood or forgiven. The exhibition suggests that coming to terms with the grief of the past may only be possible through a process that takes place over time. With his eye for geometry and its orderly laws, Gatson balances the dark side of his subject matter.

The exhibition features a reconfiguration of Spirit, Myth, Ritual and Liberation, 2008, a site specific video installation created for the New Orleans biennial art exhibition, Prospect.1. It was shown at the historic location of the African American Museum in the Treme section of the city, the first community of freed slaves in the country. The videos, consisting of fast-paced, kaleidoscopic patterns appropriated from films, include the murder scene of Meredith Hunter from Gimme Shelter (1970), projected on white Plexiglas panels; and a theatrical scene of violence from Jean Luc Godard’s socio-political film, Sympathy for the Devil (1968) which is projected on the floor. Gatson’s sound track includes The Upper Room by gospel singer Mahalia Jackson and Death Letter Blues by the Delta blues singer and guitarist, Son House.

Black sculptures, fashioned from wood and other vernacular materials, include Magic Sticks, a cluster of upright snake-like forms, referencing native, religious-based artifacts and confronting the notion of early twentieth-century sculpture based on the “primitive.” Nigeria Power, a wooden wall panel, conflates the aesthetic design of a target with its sinister function. Several works on paper depict hand-drawn lines in African colors and patterns radiating from photographs of well-known, African American activists, suggesting an historical perspective and the power of words that have a life of their own.

Rico Gatson has had recent one person exhibitions at Steve Turner Contemporary (Los Angeles), Pocket Utopia (Brooklyn), the MCAD Gallery at the Minneapolis College of Art and Design, and the Cheekwood Museum of Art (Nashville). His work has been exhibited at The Studio Museum in Harlem, Exit Art, P.S.1 Contemporary Art Center, the Whitney Museum of American Art at Altria, the Brooklyn Museum of Art, the New Museum of Contemporary Art, and MIT List Visual Arts Center.