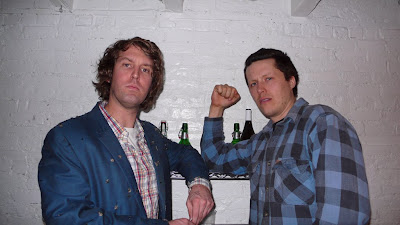 Marc Horowitz with Tony Stone at after party to William Stones show at James Fuentes
Photo: Aron Namenwirth
This is the most amazing movie I have seen in a while.. Brooklyn DIY aside/
Everything that one is supposed to do...... the formula is thrown out the door. Tony Stone does everything you are not supposed to do in a movie including taking a close-up of his ass squatting shit coming out- a hugh endless shit. Then wiping with little green leaves that are not suited to the job. The camera is either obscured, running through the woods or out of focus and the dialogue is completely non- existent except for a few lines in a language of the vikings that can not be understood. "We better move or we are toast" or something like that. The sound osillates between a beautiful lyric, sounds from Vermont and Newfoundland nature and heavy metal death viking rock. This is a story of transformation, life, and death. It will rival the best in cult films the like of David Lynch's "Erasurehead" and Elias Merhige's "Begotten" Because of Stones DIY effort, filmaking will never be the same.
Mary Reed
MAGNET/MAGNOLIA present A TONY STONE FILM
SEVERED WAYS: THE NORSE DISCOVERY OF AMERICA
soundtrack featuring MORBID ANGEL - POPOL VUH
BURZUM - DIMMU BORGIR - OLD MAN’S CHILD
BRIAN ENO - QUEENS OF THE STONE AGE
and JUDAS PRIEST.
Angelika Film Center March 13-19.
12, 2:30, 5, 7:35, 10
12:30am Fr/Sat
In the 11th century, Vikings, Indians, and Irish monks collide on the shores of
North America in a historical epic adventure of exploration, personal glory, and
religious dominance. Abandoned by a Western exploration party and stranded in the
New World, two lone Vikings wade through a grand primeval landscape,
struggling for survival while still in the grip of their Norse ways
"Severed Ways is a thrilling concurrence of oppositions, its disparate
and unique blend of elements working together in constantly
unexpected ways. Its primal, rustic story is set to a soundtrack of
everything from Norwegian black metal to Brian Eno, while the
camerawork encompasses both classical compositions and stylized
digital techniques. It gives nods to filmmakers from Dreyer to
Bergman to Herzog, while updating the subtitles for its Vikings’ 11th
century dialogue to colloquial English. (“If we stay here, we’re
toast.”) It is somehow both deeply serious and strangely silly. First-
time director Tony Stone has created a film that is steeped in cinema
history and completely original, both timeless and thoroughly modern."
-Rachel Rosen, LA Film Festival
"'SEVERED WAYS' IS A VISIONARY WORK from one of the most promising new American narrative filmmakers in recent years." — Indiewire
"SOME OF THE RAWEST, MOST REALISTIC, DEEPLY PERSONAL INDEPENDENT FILMMAKING I HAVE EVER SEEN. It completely encompasses the true metal spirit." — All Metal Resource
"A MUST SEE" — LA Weekly
www.severedways.com